This blog is part of the series I am doing that shows my progress through Season 2 in Diablo III. I’m playing a hard core Demon Hunter named Dusk this time.

I’m taking things slowly because Season 2 just happened to appear during what has been a really bad allergy season for me. Hard core characters have “one life to live”. I don’t want my Demon Hunter to die because I sneezed at the wrong moment or was zoned out on allergy medication.

My primary goal for Season 2 is to get Dusk the Demon Hunter to Level 70. If that happens, he will be my first Level 70 hard core character, my fourth overall Level 70 character, and my second Level 70 Demon Hunter.

I’m also working on earning the Seasonal Monster Slaying Achievements as I level. As you will see in this blog, I’ve now earned all three of the ones that connect to Act I. The screenshots you see in this blog were taken on February 27, 2015.

Once again, I spent time running Act I Bounties (in Normal difficulty). I’ll be more willing to raise the difficulty and take more chances after I get my Demon Hunter to Level 70. One of the things I discovered in Season 2 is that I take significantly less screenshots when I play hard core (as compared to when I play a soft core character). As such, there aren’t that many screenshots to share this time around.

While I was working on the Bounty to kill Red Rock (in the Southern Highlands), I came across a small building called “Abandoned Servant’s House”.  It wasn’t part of the Bounty, and I could have skipped it if I wanted to.  This little building wasn’t one I remembered seeing in Season 2, so I decided to go inside and check it out.

As soon as I entered the building, I earned two Achievements.  Each of them are the type that require you to visit a lot of locations before you complete the Achievement.  Instantly, I felt that I had made a good decision by entering the “Abandoned Servant’s House”.

No Stone Unturned: Explore the following dungeons in Act I.

The No Stone Unturned Achievement was one that I earned as part of my Career Achievements.  It is not a Seasonal Achievement.  It was nothing more than coincidence that I happened to find the last one I needed,  the Abandoned Servant’s House, while I was playing in Season 2.  The same is true for the Wanderer of Tristram Achievement.

Wanderer of Tristram: Complete the Act I exploration achievements listed below.

A Nice Place to Visit, Thorough Investigation, Field Work, In the Mountains, There Will Definitely Be Blood, No Stone Unturned

Argus the Collector is inside the Abandoned Servant’s House.  There aren’t any monsters to fight.  He is just a vendor that happens to be conveniently located in a small house out in the Southern Highlands.  This was the very first time I found him.  He says:

I was just packing up and readying to leave this hellish place.  Too many khazra about.  But before I move on, look at my goods and let me know if there’s anything you’d like.

The Legendary Item that dropped turned out to be a better version of the Raven’s Wing bow that Dusk the Demon Hunter was already using.  That was convenient!  I really like this weapon, and was already starting to wonder if it was time to take it to the Mystic for upgrades.  Now, that’s not a worry.  The game produced a brand new one for me!

Arachnicide: Kill 1,000 Spiders in Act I in the Season.

Arachnicide is a Seasonal Monster Slaying Achievement.  It took longer for me to earn than the other two Seasonal Monster Slaying Achievements that connect to Act I.  To get it, I made sure to clear the Caverns of Araneae before starting the boss fight with Queen Araneae (when I was given that particular Bounty).  I also stopped and did every cursed chest event that I could find.  Eventually, all those spiders add up!

The Takedown: Kill 10 champions of the following types. 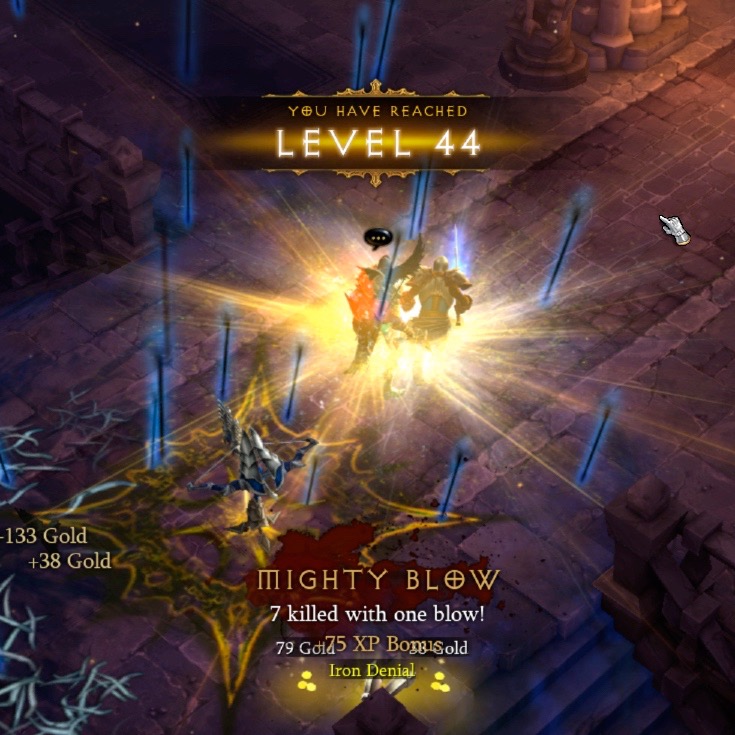 The loot that was awarded after this set of five Bounties included a Legendary item.  It was Bracers, but that’s all I know about them, since I completely failed to take a screenshot of the item’s stats.  Oh, well.

I’ve completed 46 out of 100 Act 1 Bounties so far.  Eventually, I’m going to have to go back and finish the rest before Season 2 ends.