There are many things you can do with your dragons in Flight Rising. One option is to breed them. For me, it’s fun to see what the babies end up looking like. I seem to keep one or two from each breeding, and have been selling many of them off.

Today, I was wondering what the fate of those sold (or traded) baby dragons was. All of the artwork in this post is copyright of Flight Rising.

My “starter dragons” have had lots of babies. Shadowspawn is a female Guardian, and Bob is a male Fae. Where did all their babies end up?

Their first breeding produced two female Fae dragons. I decided to keep both of them, and they are still in my Dragon Lair. Previous to this breeding, I only had two dragons. These babies were pretty, and doubled the size of my Lair.

The second breeding of Shadowspawn and Bob also produced two babies.  One was a male Fae and the other was a female Guardian.  At the time, I was trying to teach myself how to use the Auction House.  I ended up selling these two babies.

Where did they end up?

Both got exalted to the Plaguebringer.  I’m in Shadow Flight, so this annoyed me at the time.  It also kind of bothered me that the person (or people?) who bought these baby dragons didn’t even use the Random Name Generator to give them a proper name.  Since then, my Flight has gained dominance once.  The extra stuff that brings is cool, but not something I am primarily motived to gain.  I got over it.

What about the babies from Shadowspawn and Bob’s third breeding?  I put all three babies on the Auction House.  One was a female Fae.  One of the Guardian dragons was male and the other Guardian dragon was female.

Where did these babies end up?

The male Guardian got a proper name, and was exalted to the Stormcatcher.

The female Fae got a proper name and was exalted to the Plaguebringer.

The female Guardian got a proper name and was exalted to the Plaguebringer.

Those are all the babies that my “starter dragons”, Shadowspawn and Bob, have produced so far.  Right now, I do not have any plans to breed them again.  There are several other pairs of dragon mates in my Lair that I haven’t bred yet.

Pepto, one of the daughters of Shadowspawn and Bob, has produced babies.  Her mate is Santos, a male Guardian that I purchased from the Auction House.  I was looking for a very blue dragon.  He is very blue.

Their first breeding resulted in three baby dragons.  One was a male Fae, one was a female Fae, and one was a male Guardian.  These were kind of pretty, but I didn’t see a good reason to keep all of them.

I decided to keep just one, the male Fae.  I named him Zazu.  He is still in my Dragon Lair, has a mate, and has produced some babies of his own.  (More on that coming up).

The female Fae got traded to someone in return for a very red Tundra dragon.  Since then, she has been given the name Wraith, turned into a Guardian, and gotten some fancy additions to her appearance.  She is still in someone’s Dragon Lair, and has produced one offspring (unnamed).

The pretty, light blue, male Guardian was traded to a friend of mine for a very shiny female Fae (more on that later).  She gave the Guardian the name Bristi.  He is still in her Lair, and has produced two offspring (that both have been given proper names).

Next, I decided to breed Shadowspawn and Bob’s other daughter, Bulah.  Her mate is a male Tundra dragon that I named Legend.  I bought him from the Auction House.

They only produced one baby dragon, a female Tundra.

She was really pretty, so I decided to keep her.  I eventually bought her a mate from the Auction House (a male Spiral dragon).  It is going to be a while before this pair gets a chance to breed.  I named her Breeya, and here is what she looks like in adult form.

Next, I decided to breed Zazu, son of Pepto and Santos.  His mate is Trixibelle, the dragon that I traded to my friend for Bristi.  It was obvious that all of their babies would be Fae dragons.

They produced three Fae babies.  Two were male and one was female.

I felt like I had a whole lot of Fae dragons in my Lair, so I wasn’t interested in keeping all of these babies.  Eventually, I decided to keep the female Fae.   She was born with a shimmer gene that earned me an achievement.  I named her Arjana.  I haven’t picked out a mate for her yet and am unsure if I will breed her.

The other two babies got sold on the Auction House.  What happened to them?  The male Fae was named Jagar and was exalted to the Tidelord.

The other male Fae got named Kenji, and was exalted to the Shadowbinder.  I’m in Shadow Flight, so this one scored points for my team. 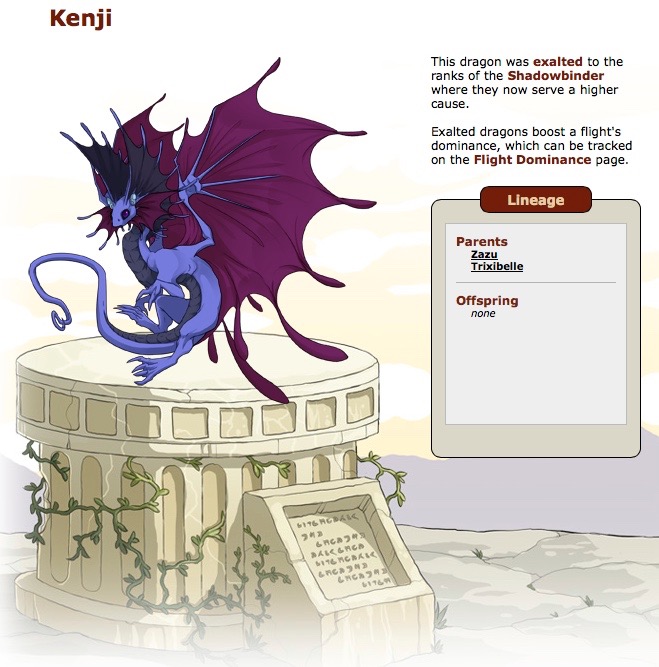 Very recently, I decided to breed Tomato, a male Tundra (that I traded a Fae dragon for) with Pepper.  She is a female Snapper that I bought from the Auction House.

I decided to keep the brown male Snapper.  I only had one other Snapper in my Lair (his mother).   Lately, I’ve been trying to collect one dragon of each color and I did not have a nice brown one yet.  I named him Cocoa.  He is still a baby, so he can’t breed yet.  I bought him a yellow female Guardian from the Auction House as a mate.

What happened to the other two babies?  The other male Snapper got named “Dead” and was exalted to the Lightweaver.  That’s an unfortunate name.

The female Tundra is currently in someone’s Dragon Lair.  She is unnamed.  I’m expecting that I will soon learn that she got exalted … somewhere.  That catches things up about the fate of the babies.  Right now, I have two dragons that produced two eggs.  Those should hatch soon, and I haven’t decided yet what to do with the babies.

UPDATE: What happened to the female Tundra?  I decided to go back and check.   As expected, she was given a proper name and then exalted to the Icewarden.

What have I learned from this?

* I tend to keep one baby dragon from each breeding.  The only exception was the second breeding of Shadowspawn and Bob, when I was trying to teach myself how to use the Auction House.  I tend to be a “digital hoarder”, so I’m rather proud of myself that I didn’t keep all the babies.

* It appears that one should assume that the baby dragons that one sells on the Auction House are going to get exalted shortly after they are purchased.  The majority seem to go to the Plaguebringer.

* If you have concerns about the potential of one of your baby dragons getting exalted, and you don’t want to keep it, I would suggest trying to trade it to someone.  It seems people who go through the trouble of setting up a trade are more likely to keep the dragon they traded for.

* If you keep putting a dragon into the Auction House, it will, eventually, sell.  You might have to knock down the price a few times before that happens, though.