The 2018 Valentine’s Day celebration in Pokémon GO was minimalistic. It featured a newly introduced Pokémon called Luvdisc. This one is pink and shaped like a heart, so it made sense to include it in a Valentine’s Day event. 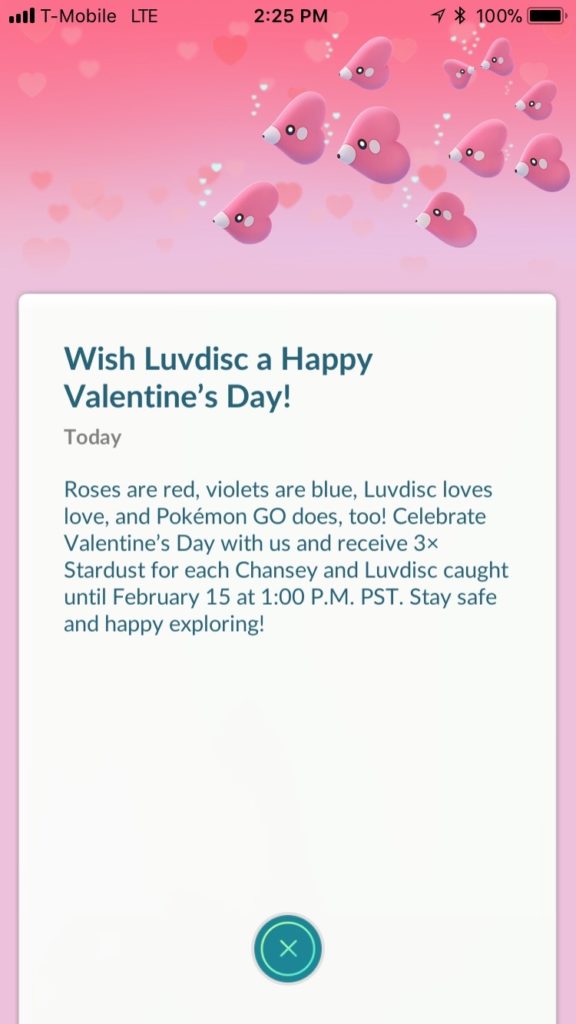 Players who logged into Pokémon GO while the Valentine’s Day event was happening got a notification about it. I like these notifications because it makes it easier for me to know when events are going on.

Roses are red, violets are blue, Luvdisc loves love, and Pokémon GO does, too!  Celebrate Valentine’s Day with us and receive 3x Stardust for each Chansey and Luvdisc caught until February 15 at 1:00 P.M. PST. Stay safe and happy exploring!

Here is a screenshot of Luvdisc in the wild. I think I managed to catch about four or five of them while the event was going on. They are larger than I expected them to be.

Based on the artwork in the event notification, I was expecting Luvdisc to be a swarm of heart shaped creatures.  It was a bit disappointing to find out that the artwork didn’t reflect what the Pokémon looked like in game.

Here is one of the Luvdisc Pokémon that I caught. It doesn’t appear to evolve into anything, but you can power it up. I’ve been told that Luvdisc is rather useless in Raids, but I can’t confirm that. I don’t do Raids very often, and the one Luvdisc I kept (and powered up) doesn’t have very high hit points.

Overall, the 2018 Pokémon GO Valentine’s Day event was amusing for a few hours. Those who missed it didn’t lose out on much.

Pokémon GO: Luvdisc Valentine’s Day is a post written by Jen Thorpe on Book of Jen and is not allowed to be copied to other sites.

If you enjoyed this blog post please consider supporting me on Ko-fi. Thank you!