Flight Rising is a game that lets you manage a Lair full of dragons. You can do many things with your dragons, including breeding them. I am nearly finished with the Flight Rising Legacy Challenge. It is a ten generation breeding challenge with specific rules and limitations. The goal is to end up with an attractive triple gened dragon at the end of the challenge.

I had no idea what to expect from this challenge when I started it. Now, I’m nearly at the end of it. All of the artwork in this post is copyright of Flight Rising. 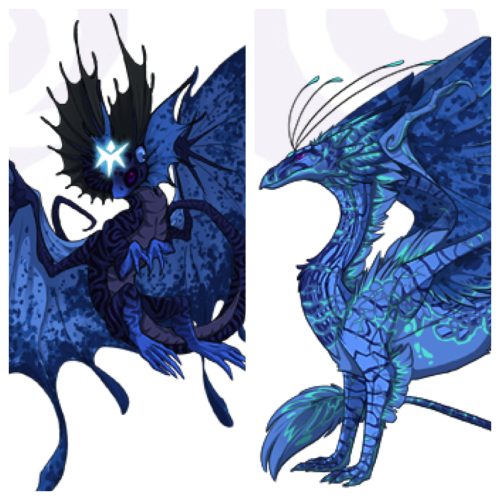 My hope was that these two dragons would end up producing a baby that had Splash/Splash/Splash genes.  I’m running out of time in the Flight Rising Legacy Challenge.  If these two did not manage to produce a triple gened baby (who was also the Heir) I had only one more chance to make that happen.  To be honest, I did not have much hope that things would work out.

As usual, I decided to use the “Preview Offspring” tool to see what the baby dragons produced by Polly and Requiem might look like.  The dragons the “Preview Offspring” tool shows you are not a promise.  They are only a glimpse at the potential of what a pair of dragons might produce. When I’m not doing the Flight Rising Legacy Challenge, I use the tool to see if a pair of dragons would produce really ugly babies.  If so, then I switch out one of that pair and try again!  I can’t do that in the Challenge, though.

It turned out that Polly and Requiem would produce pretty baby dragons.  There is no way to be certain what genes those potential babies would have.

Polly and Requiem produced three eggs.  The first one that hatched would become the Heir.  The rest, I can either keep or get rid of.  Their part in the Flight Rising Legacy Challenge ends immediately after they hatch.  Once in a while I will keep the “extras”.  Usually, I either put them in the Auction House or Exalt them after they grow up.  I have learned that there is a limit to how many dragons I can keep in my Lair.  It depends on how much food I can gather for them.

The babies were all very pretty.  The first one is the Heir.  The other two were twins.  (They were both male and they had identical genes).

The first baby in the line automatically becomes the Heir.  The Heir becomes the Founder of the next generation after he or she grows up.  Part of the rules of the Flight Rising Legacy Challenge require players to use the first baby as the Heir.  You cannot pick and choose in the hopes of starting with a better mix of genes.  The first one is it.

Clearly, Polly and Requiem failed to produce an Heir that was triple gened.  I believe this means it will be impossible for me to end up with a tenth generation dragon that has three of the exact same genes.  This is a bit disappointing.  I’m going to try my best anyway, but I’m expecting that she’s going to pass that Navy gene along to her babies no matter what I do.

Here is what Penelope looked like as an adult dragon.

Where did this Blue primary gene come from?  Neither of Gawain’s parents had that gene. Perhaps this is a clue.  I know that baby dragons can end up with a gene that is different from what their parents have if that gene is next to it on the “color wheel” of genes (for lack of a better description).  What would happen if I found Penelope a mate that had Blue/Splash/Splash?  I think it is worth a try!

Here is what Gawain looked like as an adult dragon.

Gawain and Uther are twins – they have the exact same parents and the exact same genes.  As you can see, Uther has the Blue gene, too.  I think this settles it.  My strategy is going to be to find Penelope a mate that has Blue/Splash/Splash and to hope for the best.

Here is what Uther looked like as an adult dragon.

The next step is to visit the Auction House and buy a mate for Penelope.  There are rules in the Flight Rising Legacy Challenge that limit what dragon you can select as a mate for a Founder dragon.  Obviously, the mate has to be the opposite sex of the Founder.  The mate must come from the same Dragon Flight as the Founder.  Penelope was born into my Dragon Lair, so she is Shadow Flight.  Her mate must also be Shadow Flight.

I cannot choose a dragon that is already in my Lair as a mate.  Players are required to purchase mate dragons from the Auction House.  I cannot pick a mate dragon if that dragon has already had babies.  There is a limitation on how much Treasure I can spend on a mate.  It goes up every generation.  I can spend up to 90,000 Treasure on Penelope’s mate.

I tried to find a dragon that had Blue/Splash/Splash genes and that was in the Shadow Flight. Unfortunately, the only two dragons that fit those descriptions are unusable.  Penelope’s brothers, Uther and Gawain, were in the Auction House.  No other dragons match what I was hoping to find.  Flight Rising does not let you breed dragons that are too closely related.  This will never do!

As an experiment, I decided to try and find a dragon that was Blue/Blue/Splash.  My hope is that the Splash Tertiary gene will carry over into all of the offspring.  I’m taking a chance and hoping that the two Blue genes will magically shift over one space and become Splash genes in the offspring.  It’s worth a try!  There was one dragon in the Auction House that fit what I was looking for – and he was at a bargain price!

He only cost 8,000 Treasure.  That price is far below my limit of 90,000 Treasure.  As you can see, this dragon was still a baby.  Therefore, it was impossible for him to have already produced some baby dragons.  He’s from the Shadow Flight, and has the genes I was looking for. I used the Name Randomizer to come up with a nice name for him.

Here is what Zanril looked like as an adult.

No matter what happens, one thing is certain.  I won’t have a need to purchase any more mate dragons after this one.  Penelope and Zanril are the ninth generation of dragons in my Challenge, and they will produce the tenth generation.  Once they produce a baby, the Challenge is over!  I am looking forward to completing the Flight Rising Legacy Challenge and discovering if the last Heir has triple genes.