Gardens of Time: Chapter One

Gardens of Time was originally created by Playdom. RockYou purchased it and made it into an app. I’ve been playing it on my iPad. The app is a bit crashy, but the content of the game is mostly the same as it was before.

Chapter One of Gardens of Time starts with a tutorial that walks players through part of Chapter One. The tutorial is mostly over by the time players hit Level 2. Here is what the rest of Chapter One was like.

Alistair Wells: Lovely Garden, isn’t it?  Filling this Garden with artifacts is one of the perks of being a Time Agent. The more artifacts you preserve here, the greater your Reputation within the Society.

Put one artifact into your Garden, and you complete the My First Artifact Quest. It doesn’t matter what the artifact is. Any artifact will do!

If you look behind Alistair, you can see the artifact I bought to complete the My First Artifact Quest. It is a Standing Anubis (which can be purchased from the Artifacts section of the store for 700 coins.)

Alistair Wells: We’re off to Time Manor!  The home office is located in a secret place outside the normal flow of time.  I’m hoping someone there might have more insight into these most recent calamities.

Alistair Wells: Eleanor, dear, what happened? The Manor is a mess, and you look awful. Who did this? Who’s responsible?

This is the point where players unlock the second scene in Chapter One. It is called Time Manor. Players need to find a series of objects in that scene. It is possible to memorize where the object are located.

Alistair Wells: This keeps getting stranger.

Alistair Wells: I think Eleanor might know more than she’s letting on. But why would she keep things from us?

Lulu: You’re the newest of the new recruits, huh?  Nice to meetcha!

Lulu: Why don’t you pop on by my Garden, and I’ll show you a thing or two!

Lulu is an NPC (non-player character) – but she also counts as a Neighbor. This means players can visit her Garden once a day, play a timed scene, and finish (or work on finishing) Quests that require players to visit Neighbor’s Gardens. Lulu cannot send items to Neighbors, though.

In the original version of Gardens of Time, it was super easy to get other players to be Neighbors with you. In the app version – it’s not so easy at all. I believe that there are very few people playing this game (as compared to how many played it on the Playdom website years ago). Sometimes, the app version of the game will crash when you try and visit a Neighbor (including Lulu).

Lulu also shows up in some of the story portions of the game. She’s the only NPC that is a Neighbor and plays a role in the story.

It also says: Someone may be in peril!  Tap the Exclamation balloon to activate Blitz Mode!  I’ll explain more about Blitz Mode in a bit.

Lulu:  You made it!  How do you like my garden?

Lulu is Level 25, so her Garden is much bigger than the player’s Garden can be at this point in the game.

Lulu: I’m so very proud of it. Everyone loves to wander through here and settle down for a rest when they’re off duty.

When a player visits a Neighbor’s Garden for the first time that day, a pop-up appears.

It says: Please Help Us! We dropped some things while time traveling. Would you help us find them? Traveling there will take 0 Energy but there’s a reward in it for you.

Players need to click the “Sure Thing!” button to start a Blitz.

Get Ready to Blitz!  You have 60 second to find as many hidden objects as possible.  Are you ready?

This is the Pamukkale Springs Blitz. It is one of many. Players will get a completely random Blitz screen every time they do a Blitz. A Blitz functions like the Chapter parts of Gardens of Time. Players must find the objects that are listed at the bottom of the screen. The ones you find will be replaced by new ones. The only difference between a Chapter and a Blitz is that a Blitz is timed and will stop when the time runs out.

Players complete the 2 Start Giza Riverfront Quest by earning 2 stars on the first Scene in Chapter 1.

I completed the Increase Reputation Quest by purchasing a Sarcophagus (for 1,210 coins) and putting it in my Garden. I also bought a few more of the Egyptian artifacts. Players earn Reputation by putting things into their Garden.

In the previous version of Gardens of Time, it was possible to level up artifacts (and other items) by asking Neighbors to send you certain things. This does not appear to be possible in the app version. Players need to have a certain amount of Reputation points before they can unlock new Scenes.

Alistair Wells: We’ve detected more trouble in Ancient Egypt. Let’s get to the bottom of this, shall we?

You’ve Unlocked the Goggles Hints!  Use it to easily search for hidden objects. When your goggles are over a hidden object, the object will glow. The Googles Hints only last for a short period of time – and they do not automatically replenish. Once you use them, they are gone.

I reached Level 5!  The screenshot above shows the stuff that I can now purchase and put into my Garden.

Alistair Wells: We’ll have to be thorough on this one. Search long enough and we’re bound to find where Richard’s gone.

This is the part where the story line of Gardens of Time takes players to the Pyramid Shadows Scene (the third one in Chapter One). This is also the point where a conspiracy theory begins to form. 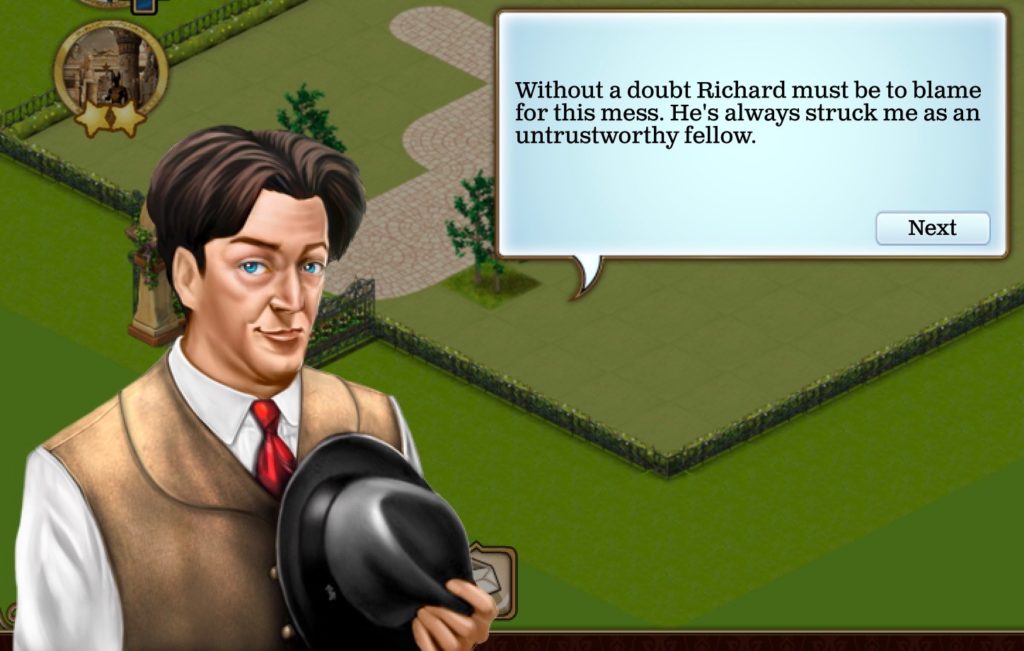 Alistair Wells: Without a doubt, Richard must be to blame for this mess. He’s always struck me as an untrustworthy fellow.

Alistair Wells: But why would Eleanor try and protect him?

Alistair Wells: In any event, we must attempt to waylay him before he disrupts history any further!

Players complete the Peril at the Pyramids Quest by going to the Pyramid Shadows Scene and finding 12 objects.

Players complete the 2 Star Pyramid Shadows Quest by playing the Pyramid Shadows Scene, over and over again, until they earn 2 stars in that Scene. A player can earn a total of four stars in each Scene.

Players complete the Star Challenge Quest by earning a total of 6 stars in Chapter One Scenes.

Alistair Wells: I’ve found another disturbance… and this one’s a doozy.

Richard: Well hello Alistair. It’s embarrassing for a time traveler like yourself to be late all the time. And dragging your poor new recruit into your mess…

Alistair Wells: Hardly my mess, is it Richard? Why are you doing this?

Richard: Me? I’m here trying to help! Time has split here, and we need to address the difference to preserve the continuum.

Richard: Think your new recruit’s up to it?

As you can see behind the two NPC’s in the above screenshots, this Scene is split in two, with what appears to be the same image on either side of the center. Players have to find 6 items that appear on one side – but are missing from the other side.

Richard: Alastair’s a good man, you know, but he’s always had it in for me.

Richard:  If you really want to know who’s causing these disturbances, why don’t you ask Eleanor? I think you’ll find the answer illuminating.

Player complete The Two Tombs Quest by traveling to the Egyptian Tomb Scene and finding 6 differences.

Players complete the 2 Star Egyptian Tomb Paradox by playing that Scene over and over until they earn 2 stars.

Alistair Wells: Richard says that Eleanor’s involved in these disturbances? Then we have no choice. We must confront her, and learn the truth.

Quincy: Just the Agent I was looking for!  I discovered a lost research lab in the basement of Time Manor!  Click on the new Time Lab button!

This starts a series of quests, all of which function as a tutorial for players. When finished, a brand new Gardens of Time player will have a basic understanding of how to use the Time Lab.

The series of quests ends by letting the player know that the Handbook Expired. Check back soon to see if Quincy has found a new Handbook!  I suspect this part of Gardens of Time is a piece of the original game that isn’t functional in the app version.

Eleanor Lansing Purlieu: Alistair, what a surprise! If I had known you were bringing the new inductee I would’ve cleaned up a bit.

Alistair Wells: Eleanor, enough of this. We spoke to Richard. What do you know about the disturbances in Egypt?

Eleanor Lansing Purlieu: Oh, oh my.  his is all fairly embarrassing. Help me clean up and I’ll explain everything.

To complete the Eleanor Confronted Quest, players must go to the Hourglass Study Scene and find 12 objects.

Eleanor Lansing Purlieu: I hope you won’t think less of me for this.

Eleanor Lansing Purlieu: For all his faults, Richard can be very charming. And to think of him with that duplicitous minx, Cleopatra! I – I let it get the best of me. Do apologize to Alistair for me.

Eleanor Lansing Purlieu: One thing has been bothering me, though. The disturbances in Egypt were my doing, yes. But I didn’t cause the calamity at Time Manor…

Eleanor Lansing Purlieu: I can’t help but think we have greater problems ahead of us then my love life. Who could have found our secret headquarters? And what do they want with us?

Players complete the Loose Ends Quest by earning 9 stars from Chapter 1 Scenes, by having 2 new Artifacts in the Garden, and by placing 3 new Decorations in the Garden. Doing so unlocks Big Ben, which is a Wonder.  A Wonder is a special item that players cannot purchase. They must unlock it by completing Quests.

I reached Level 7. The screenshot above shows what items I have unlocked.

I unlocked the Ancient Ship Paradox Scene. It is the final Scene in Chapter One that players can unlock for free.

I got 4 stars in each Scene in Chapter One.  The last Scene requires Gold to unlock (and I am not doing that).

Gardens of Time: Chapter One is a post written by Jen Thorpe on Book of Jen and is not allowed to be copied to other sites.

If you enjoyed this blog post please consider supporting me on Ko-fi. Thank you!